The End of the World is a giant wall running through the Elencia continent in Grandia. The wall itself effectively splits the world in two with inhabitants from both sides believing that there was nothing on the other side, this led to inhabitants of the New World naming the wall, the End of the World.

Although the wall spans the whole of the planet, The End of the World crosses land between the Misty Forest on the west and the Valley of the Flying Dragon on the east. The wall itself has many remnants of ancient Angelou affixed to its structure, these include lifts, puzzles and ancient machinery on the walls top.

When humans stole Icarian wings, darkness covered half of the world during late Angelounian times. To prevent the darkness from spreading, the Icarians built a wall and were believed to have thrown the Mist-Clearing Nuts over the wall to the people of Luc to help them see through the darkness.

As centuries passed, the darkness on the other side became mist. The mist dispersed in many areas of the world but is still prevalent in the forest close to the wall.

Upon Liete's request inside the Dom Ruins, Justin, Sue and Feena head east with aspirations of finding Alent. Liete tells the party that there is no End of the World which leads Justin to make the decision to climb it.

After passing through the Village of Luc and the Misty Forest, the party arrive at the base of the wall. While a little reserved at first due to the size of the wall, the party rally together and start their ascent.

During the climb the party stop to reminisce about previous adventures together and how they met, but with each day passing, the party finds themselves unsure about ever reaching the top.

After one nights' sleep they finally see the sun rising from the east, which leads the party to realise that they have made it to the top. The party stand atop the wall looking out towards the Lost World but after analysing an ancient machine, the party are picked up and dropped off the End of the World and into the Valley of the Flying Dragon.

End of the World as seen from the Rangle Mountains

The party looking out from atop the End of the World 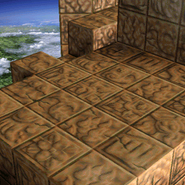 A battle background in the End of the World
Add a photo to this gallery
Retrieved from "https://grandia.fandom.com/wiki/End_of_the_World_(Location)?oldid=17704"
Community content is available under CC-BY-SA unless otherwise noted.