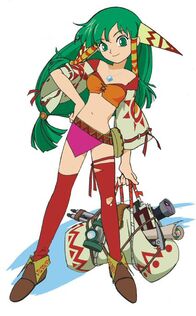 Feena (フィーナ) is a main character and the heroine of the original Grandia. She begins the game as a professional adventuress and poster girl for the Adventurer's Society but later joins Justin and Sue on their quest to find Alent and solve the mystery of the ancient Icarians.

"Wow! A GIRL!? The greatest adventurer in the New World is a girl. That's so cool! And she's pretty, too."
―Sue's first reaction to Feena

Feena has long green hair that flows down the full length of her back, some of which is tied through two patterned hair accessories. Feena is depicted as a regular human and has green eyes although some artwork incorrectly colours them brown. Feena wears a small, tan coloured shawl covering only her arms and printed with a red sun on both sleeves. She wears an orange bra top that leaves her abdomen showing. Feena has a thin red belt holding up a small pink skirt and wears a pair of ripped red socks up past her knees. Feena wears a pair of brown shoes sporting a similar tribal pattern to that on both her belt and shawl. When in Icarian form, Feena sprouts six light green wings.

Feena's personality initially starts as very professional and almost arrogant, she dismisses Justin and Sue on many occasions after first meeting them without giving them a chance to show her if they are good adventurers. After Justin and Sue save her from a forced marriage to Pakon, Feena becomes much more of a free spirit which is shown through the games remaining events. Feena is a very caring character and is often seen worried about Justin, Sue and her sister Leen but is strong willed enough to make decisions under pressure.

Feena spent the majority of her childhood living with her sister Leen on the outskirts of New Parm on the New Continent of Elencia. Soon after Leen left to join the military, Feena decided to fill the gap left by her sister and become an adventurer. She joined the Adventurer's Society, stationed in the town of New Parm and after several successful adventures, became an instant celebrity across Elencia. She becomes friends with most members of the society as well as most of the local sailors, merchants, and fishermen. Over time, she actually became conceited about her title and skill as an adventurer. Yet, she is still caring and respectful to others and always up for impossible and daunting tasks. Soon after meeting Justin, she felt her position on the matter of organized adventuring was wrong and promptly quit the Society to join Justin in his quest for Alent.

Feena's weapons types are knives and whips, and she has Fire magic at her disposal when she joins the party. At very high magic levels, Feena will unlock very powerful Icarian magic which is unique to her character. When she joins the party, she may be classified as a predominantly offensive mage/melee fighter, but most of her spells are comprised of healing and support spells; she does have several hard-hitting spells such as Crackling, BA-BOOM!, and DragonZap however. Her Agility and WIT are pretty high, so she takes her turn often and moves around the field quickly.

[*] - Storyline must progess to certain point to unlock

Feena is one of the fastest characters in Grandia but is only so due to weapon bonuses. With every level grown Feena gains 1-2 points of Vitality and Wit, 2 points of HP, 2-3 points of Strength and despite being thought of as a quick character, Feena gains no increase in her agility and must rely on the bonus given from increasing her knife skill.

Feena makes an appearance as a playable character in Grandia Parallel Trippers and in contrast to the original Grandia, she starts as one of the members of your party after the prologue events of the game. As with Grandia, Feena can still only strike with whip and knife skills. She combats below average physical skills with a heavy magic reliance and can cast Fire, Wind, Water, Earth and Icarian magic.

Feena makes a return in the spin off title, Grandia: Digital Museum. She is one of only three playable characters available in the game along with Justin and Sue and is available from the beginning of the game. Feena's fighting style is the same of that in the main game, she is the quickest of the three characters and has the highest base SP and Agility.

Feena appears as a playable cocoroid in the Game Arts developed, online action RPG, Picotto Knights on PlayStation Vita. Feena and the other Grandia characters are available to download as additional content within the game. 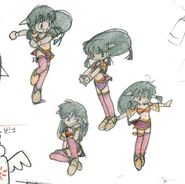 A beta portrait of Feena found on the Saturn Promo Disk