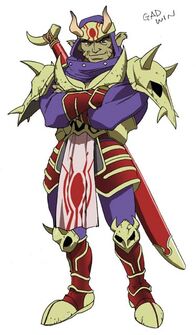 "Even if a man has to lay down his life, he must carry through."
―Gadwin[src]

Gadwin (ガドイン) is a playable character from Grandia. Born in the village of Dight, Gadwin is a masterful warrior of few words, preferring his actions speak for themselves. He is well respected in his home village and is often called upon by the elder to complete tasks. During their journey together, Gadwin acts as a father figure to Justin.

"I was surprised to hear a young man like you crossed swords with Gadwin, the greatest swordsman of Dight."
―Dr. Alma to Justin 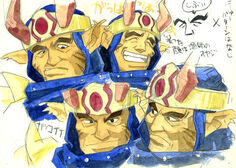 Gadwin is a large humanoid with tan skin, his hair colour is unknown but likely dark due to his eyebrow colour. Like all people with Dight heritage, Gadwin's face is marked with brown stripes across his jaw and his ears a pointed with tufts on the end. Gadwin's main item of clothing is a purple body suit, this is covered in part with armour constructed from animal bone. Gadwin also wears a horned headband with the Dight crest painted on its front. Like many brute characters, Gadwin has a large sheath attached to his back to carry the Himmler.

Gadwin is described as a respected warrior with a tendency to put others ahead of his own health. The Dight Elder looks upon Gadwin very fondly and often asks for his assistance defeat monsters terrorising the village and surrounding area. It is insinuated that Gadwin may be a bit clueless when it comes to others showing emotions towards him, Feena points out that Dr. Alma may have feelings for him but Gadwin insists that they are just friends. Gadwin is very brave, shown in the Typhoon Tower when he was willing to risk his own life to save the village of Dight.

Gadwin is warrior from the village of Dight in the Lost World. Gadwin spends most of days training near his home in the Valley of the Flying Dragon, a short distance from the village. Despite his tough exterior, Gadwin is wise and philosophical. He often talks about the virtue of manhood and the transition from boy to man, a fable he shares with Justin upon meeting him. He is extremely protective of his village and the people in it and has the utmost respect for the Elder. He may consider the clinician Dr. Alma to be his significant other, but it is otherwise never stated.

Gadwin is the powerhouse character but does not resemble the typical Knight class due to his magic proficiency. Gadwin is one of two playable characters that can only equip one weapon type, his being swords although Gadwin does have the added knockback effect to enemies he attacks. Gadwin also has the ability to cast fire and earth spells although his magic ability is low compared to the other party members used at the time.

Gadwin is the the standard power character in Grandia. With every level grown Gadwin gains 2-3 points of Strength and HP, 1-2 points of Vitality and Wit, and 1 point of Agility Due to Gadwin's low flexibility with weapons and magic he cannot gain much Agility throughout the time he is with the party.

Person was KO'd: "Uh uh uh, you guys need more practice."
Boss was killed: "Like master, like man!"
Normal victory: "Come, try again!"
Perfect victory: "You're no match for me!"

The first battle against Gadwin is entirely unwinnable. After he defends for about three or four rounds, he'll use Dragon Cut, dealing close to 9999 damage to Justin.

Gadwin is now actually relatively simple. If Justin is well-trained, he may be moving a lot faster than Gadwin. Use Midair Cut if you have it to deal the most damage to Gadwin. Gadwin will most of the time use simple combos against you. He'll occasionally use Flying Dragon Cut and maybe BOOM! on you if you move to slow taking him out. He'll RARELY use Dragon Cut, and if he does you can easily interrupt it with a Critical or just Defend. You can start off using a Power Mushroom on Justin to increase his attack power, then keep using skills until the battle is over. It's supposed to be implied that Gadwin is wanting you to win, so don't hesitate to dish out the pain.

Gadwin makes an appearance as a playable character in Grandia Parallel Trippers and can be recruited after the events at the White Tower. Like the original game, he can wield sword based skills, in addition to this, Gadwin can now use mace and axe based skills. He also proficient in Fire and Earth magic, a trait carried over from the main game.

Gadwin appears as a boss in Grandia: Digital Museum and is fought alongside Milda at the top of the Tower of Giosu. Gadwin has 9999HP and utilises many of the skills he possesses in the main series including Dragon Cut. Gadwin gives the party 8000exp and 7500G when defeated.

Gadwin also appears in several minigames found in the Alent Museum. Gadwin is playable during the baseball minigame in which Gadwin must score as many homeruns as possible without striking out.

Gadwin appears as a playable cocoroid in the Game Arts developed, online action RPG, Picotto Knights on PlayStation Vita. Gadwin and the other Grandia characters are available to download as additional content within the game.