The Ghost Ship is a haunted pirate ship that is said to appear to sailors who break the laws of the sea in Grandia. The Ghost Ship has the ability to stop the engines of ships to trap them on the ocean.

The Ghost Ship was once a regular ship before it was attacked by the Squid King. The Squid King killed all the crew and has since taken over the ship permanently. Since the attack, the Ghost Ship has become inhabited by several monsters that will attack any who attempt to board the ship.

During the passage between Parm and New Parm, the Ghost Ship appears and prevents the Steamer from moving. Feena decides that she must go to the Ghost Ship and uncover the mystery that halts their progress to New Parm but no other crew will join her. Justin and Sue decide to join her in a bid to prove they are serious adventurers.

On arrival the party find the main door locked but find a hole in the ship that takes them down to the bottom. Justin and the party make their way to the top of the ship and inside the captain's log find that the ship was shipwrecked by a monster. The Squid King appears and the party manage to defeat it.

Once defeated the ship begins to sink and the party escape onto the deck before being lifted back to the Steamer by the crane, Elizabeth. The Ghost Ship sinks into the ocean, never to be seen again. 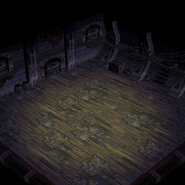 A battle background in the Ghost Ship 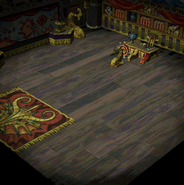 A battle background in the Ghost Ship
Add a photo to this gallery
Retrieved from "https://grandia.fandom.com/wiki/Ghost_Ship?oldid=17601"
Community content is available under CC-BY-SA unless otherwise noted.