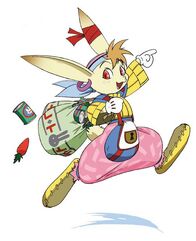 Guido (ギド) is a playable character from Grandia. Guido is a Mogay from the city of Zil Padon. He is a traveling salesman and also Elder of all the Mogay in Zil Padon. Guido meets Justin several times on his journey and later joins the party to assist him on his journey to Alent. 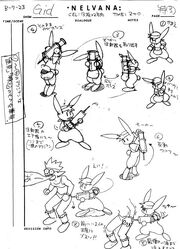 Guido the Mogay looks similar to a bipedal rabbit, he has beige fur covering his body with a tuft of sandy blonde hair coming from underneath his coloured bandana. Guido's left ear has a small red wrap tied in a bow on it, while both ears are pierced with a pink loop earring. Guido wears a yellow striped top and white gloves, his bottom half is covered with a pair of baggy pink trousers with a small hole in the back providing room for his tail to come through. Guido feet are protected by leather moccasins.

When the party first meets Guido he seems very mysterious, he seems to know a lot about Justin and portrays himself as very wise. As the game unfolds, Guido becomes a mentor to Justin and proves to be a very fair, just leader and a wise mentor.

Guido may seem cute, timid, and pretty young, but he is actually aged and could be at least over 50 in human years, which could attribute to his worldwide knowledge, a trait many Mogay share. His evident profession is a traveling saleman. Because of this, there is nothing about Guido that doesn't prevent him from trying to make a quick buck. He actually meets Justin in Dight in the Lost World due to business, even though he lives on the East Elencia continent in Zil Padon. In what is otherwise his main profession, Guido is also the elder of the Mogay in Zil Padon. His dialect is the same as most Mogay, which is essentially an Italian accent, adding the 'a' sound to many words, such as "You can-a see that you are-a not alone." In the later parts of the game, Guido acts as a guide and teacher for Justin, often expressing to Justin that he has a bigger part to play in the fate of the world.

A Salesman in Dight[]

"But you know, everyone gets-a better with my medicine. Just warms-a my heart, and fills my wallet"
―Guido[src]

Justin, Sue and Feena first encounter Guido when they first visit the Dight Village Inn. He is initially calculating how much of his medicine Doctor Alma needs and how much money it can make him. Guido explains to the party that he is a Mogay, a traveling salesman from Zil Padon and is in Dight for business.

Guido instantly recognizes that the party are from the other side of the End of the World and explains to the party that everyone is born to play a part in life, even Justin, who is shocked that Guido knows his name. Guido tells the party that if they continue to travel they can learn all about the world, the spirits and themselves.

Lodgings in the Forest[]

Justin and Feena meet up with Guido a second time after reaching the East Elencia continent, in the middle of the Virgin Forest. Under Guido's insistence they stay the night in his tent and exchange stories of what they have been up to since they spoke last. During the night Guido discusses with Justin about the Spirit Stone, it's significance and Justin's role in the fate of the world.

In the morning, Guido tells you to head to the nearby village, Cafu and to visit him in Zil Padon whenever they are near. Before Justin and Feena leave, Guido ends up charging the couple 100G for staying the night.

"Everyone got a place in the world, a role to play. That's-a mean EVERYBODY, eh?"
―Guido[src]

The party meets Guido again when in pursuit of the Medal of Knowledge, which is supposedly under Zil Padon. After asking Justin why he wants to pursuit Alent, Guido joins the party.

The party enters the Underground Ruins in pursuit of the Medal of Knowledge and engage in combat with the Ruin Guard. Once the medal is aquired, the party is cut off by the Garlyle Forces and the Golems of Angelou. Guido and Rapp are seperated from Justin and Feena.

Guido and Rapp obtain a flying manta at some point. They save Justin from the rubble of the ruins and fly off to chase down the Grandeur airship in hopes of rescuing Feena. The manta is attacked and the party is dropped onto the surface of the ship.

The party enters the ship in search of Feena. After battling dozens of soldiers, they are blocked off by Nana, Saki, and Mio and are forced into combat. Once the sergeants are subdued, Rapp messes with the ships controls, accidently setting off the self-destruct sequence. In thier haste to find Feena, Rapp and Guido are seperated from Justin when the ship tears in two. When the ship is completely destroyed, Rapp and Guido attian the flying manta again and rescue Feena and Justin, who are free falling in the sky after the destruction of the ship.

The party rests and recover in Guido's tent in the Brinan Plateau. Now they are back together, they decide to continue their quest to find Alent.

The party heads to the top of Rainbow Mountain and open up the path to Alent with the Medal of Knowledge. It is here that Guido leaves the party.

"All this is your power. So use your power to save the world. It's-a your job, no?"
―Guido to Justin[src]

Justin runs into Guido in Zil Padon shortly after Gaia attacks the city. Guido is busy with reconstruction when Justin asks if he can help. Guido helps Justin with his helplessness by gathering all the allies back together to give him encouragement.

Guido is seen aiding the Garlyle Forces in the fight against Gaia. He joins together with the other former playable characters.

Guido is last seen having conversations with people after the final battle.

Guido spends the least amount of time traveling with Justin and the others, but he is formidable nonetheless. He can equip Knives, Swords and throwing weapons, but that doesn't make him unique. What does make him unique is that Guido is the only character in the game who has a three hit Combo compared to the normal two. Like Milda, Guido has no aptitude for magic and cannot learn any spells.

Guido is a fast character that can unleash three combo strikes instead of the usual two. With every level grown, Guido gains 1-2 points of Strength and Vitality, 2 points of HP and WIT but Guido gains no increase in his agility and must rely on the bonus given from increasing his knife skill. Guido has the same base stat guide as Rapp.

Guido makes an appearance as a playable character in Grandia Parallel Trippers and he is recruited automatically after finding Lilly in the Tranquil Sea. He can wield sword, knife and projectile based skills just like the original game. In similar fashion, Guido cannot learn any type of magic. 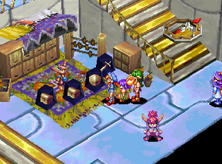 Guido makes an appearance as a non-player character in Grandia: Digital Museum. Guido runs the shop in the Alent Museum and is can be visited at any point through the game. In addition to the usual weapons, armour and accessories that you can buy theatre tickets to use in the museum.

Guido appears as a playable cocoroid in the Game Arts developed, online action RPG, Picotto Knights on PlayStation Vita. Guido and the other Grandia characters are available to download as additional content within the game. 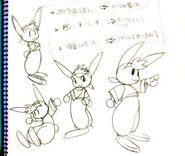