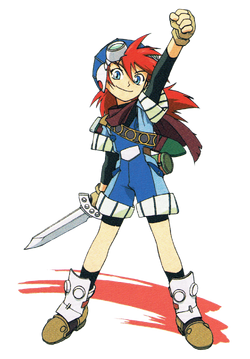 "For a first rate adventurer, it comes with the territory!"
―Justin[src]

The young Justin (ジャスティン) is the main protagonist of the Grandia story. He is an adventurous young boy who sets out to be an adventurer as his father and grandfather were before him. He is the childhood friend of Sue and always adventures with her and Puffy around their hometown of Parm. 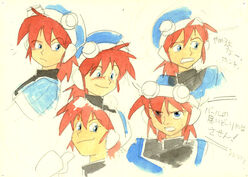 Justin has long red hair that flows down his back, some of which is hidden underneath his blue hat and trademark goggles. He has blue eyes and his design resembles an average human. Justin wears a blue, one-piece costume that upturns just above his knees. He sports a green sheath on his back for his sword. He wears beige gloves, a burgundy scarf and a pair of tan shoes complete with white shinguards.

Justin is best described as an impulsive youth with a moral core. He is often scolded by both his mother and Sue for acting rash in certain situations. His drive comes from his curiosity and will to learn about the world around him. He believes in keeping his friends close, while at the same time being protective of them. He often resents submitting to authority, which sometimes gets both him and Sue into trouble.

Justin always looked up to his father who was also an adventurer. His biggest accomplishment was discovering a large amount of species on the Old Continent. His father then unexpectedly dies one day, although never revealed, on an adventure when Justin was only young, leaving him in the care of his mother Lilly. Since that day, Justin has treasured his father's memento: a green stone with ancient and foreign symbols. Justin was convinced that it was the real fabled Spirit Stone from the fabled Angelounian legend. The Parm museum Curator noticed this and had high hopes for him. Justin had always loved adventuring with his friend Sue and her pet Puffy, who was actually a creature Justin's father discovered one day during his travels.

Justin is the most all-round character within the game and can be used in a variety of ways. He can equip swords, axes and maces. He can also use all types of magic, though he doesn’t have any at the beginning of the game. Although his stats are well-balanced both physically and magically but his forte is physical strength.

Justin is the most well rounded character in Grandia and although his physical attributes excel his growth still reflects this. With every level grown Justin gains 1 point of Vitality and Agility, 1-2 points of Strength and Wit and 2-3 points of HP. Without the assistance of weapon or magic bonus, Justin's HP will grow very high naturally.

Person was KO'd: "That was close!"
Boss was killed: "Yeah! Big win for us!"
Normal victory: "Alright! We won!"
Perfect victory: "What a cinch!"
Special Boss victory: "Yeah! We won guys!"

Justin makes an appearance as a playable character in Grandia Parallel Trippers and is an early recruit to the team. He can wield sword, mace and axe based skills just like the original game. He also has the power to possess Fire, Wind and Water magic but unlike the main series, Justin cannot learn Earth spells and therefore unable to cast Forest or Explosion spells either. Justin starts with sneakers equipped which raise his agility, in addition he begins with the following action cards; Slash (2), Double Slash (4) and Burn! (2).

Justin makes a return in the spin off title, Grandia: Digital Museum. He is one of only three playable characters available in the game along with Sue and Feena and is available from the beginning of the game. Justin's fighting style is the same of that in the main game, he is the most physical of the three characters but has the lowest base SP and agility. Justin's spell list is mostly the same, except he learns Runner instead of Zap!, and Stram instead of Cure.

Justin appears as a playable cocoroid in the Game Arts developed, online action RPG, Picotto Knights on PlayStation Vita. Justin and the other Grandia characters are available to download as additional content within the game.