"Was my faith misplaced?"
―Melfice[src]

Melfice is the brother of Ryudo and one of the antagonists of Grandia II. He is not originally evil, but is possessed by the Horns of Valmar, which manifests in the single horn protuding from his forehead.

Melfice is elegant and slightly peculiar. A talented and intelligent young man left corrupt by his own genius and greed, he is often referred to as the Bringer of Ruination for he leaves nothing but corpses in his wake of chaos.

Melfice grew up with Ryudo on the Isle of Swordsmen, Garlan, and was raised by the Village Chief following the loss of their parents. Training in the way of the sword, Melfice became the best swordsman the village had ever seen, inspiring Ryudo, Gatta and the entire village. Eventually he became engaged to the Village Chief's daughter, Reena. One day the sword upon which the town was built began to create earthquakes, and in investigating the disturbance, Reena found a Piece of Valmar sealed near the sword. When she failed to return, Melfice went after her. The young Ryudo, having secretly followed him, then witnessed Melfice murdering Reena in front of him and leaving without explanation. Melfice's fiancé had in fact been possessed by the Horns of Valmar, and when he killed her, Melfice himself became possessed. From that point onwards, he is little more than a host for the Horns of Valmar. Ironically, in seeking more power to destroy evil, Melfice became evil himself.

He is responsible for the events in Roan's kingdom - including the possession of Tio by the Claws of Valmar - and the reason why Mareg first joins the heroes' team.

In Cyrum Kingdom he convinces the King (Roan's father) that beyond the Gate of Darkness (in the Castle's basement) lies hope. After the heroes defeat Tio, he attacks the King, leading to his incapacitation. Apparently his strongest attack was the Wailing Soul Slash, which he used on Ryudo to throw him off balance. With Ryudo weakened, Melfice escapes and rushes back to his home village waiting for Ryudo to come after him for the final battle.

He is eventually defeated by the heroes and dies repentantly, thanking Ryudo for saving him. However, the Horns of Valmar depart from him and enter Ryudo instead.

Melfice displays two distinct personalities. Before he was possessed by the Horns of Valmar, he was a kind and friendly young man who sought the power to fight evil. As the possessed Melfice he is a cold, arrogant, sadistic killer.

He fights with the sacred sword the village people worshiped as their Idol. With it, he uses the Demon Horde Slash and Wailing Soul Slash attacks. Besides that, he had a regenerator which casts spells to support him. 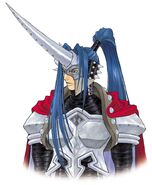 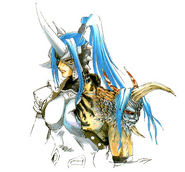 Melfice with the Regenerator
Add a photo to this gallery

Retrieved from "https://grandia.fandom.com/wiki/Melfice?oldid=17952"
Community content is available under CC-BY-SA unless otherwise noted.