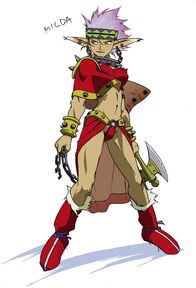 Milda (ミルダ) is a playable character from Grandia. She is a resident of Laine and exhibits incredible strength. She is a strong physical fighter and like most Lainians, cannot cast any form of magic. Milda is quick-tempered and rash but often shows a sweet side and despite only being 19, spends most of her time as a mother figure to Justin and the party.

"Brilliant deduction!! Of course they found you, you draw too much ATTENTION!!"
―Rapp to Milda

Milda is a muscle bound female with lightly tanned skin. She has spiked purple hair and ears similar to most humanoids in the game. Milda wears a red battle garment which exposes her abdomen and legs accompanied with red boots. She also wears two gold wristbands made of metal and a spiked shoulder pad along with a intricate head band and chain links which act as earrings.

Milda, like most Lainians is quick to anger but shows a softer motherly side well beyond her years. During her time with the party she acts as the mature voice of reason. She also uses her knowledge of East Elencia to lead the party across the continent. Milda also spends most of her time making reference to her deep love with her husband, Darlin.

Milda is a robust amazonian woman from the village of Laine in East Elencia. She is discovered by the party trying to break into the Tower of Doom in order to avenge the loss of her village to an unknown evil. She initially recieves snide remarks from Rapp, but the two quickly become friends after successfully destroying the tower. Milda surprisingly has a bubbly personality, but once angered, she goes into a hellish rage. She is obsessed with her husband Darlin, who is actually a talking bull and one of the three wise men of Laine.

Like Justin, Milda uses swords, maces and axes to deliver offense. As Lainians prefers fighting with their physical strength rather than with their mind, Milda is unable to cast magic at all.

Milda's best and most predominate attribute is her strength. She also starts out with one of the highest initial HP values in the game, so she can survive most strong attacks. Her attacks can also have a huge "knock-back" effect, which sends the enemy flying across the battle area upon contact. With every level grown Milda gains 1-2 points of Strength and HP, 2 points Wit and 1 point of Agility and Vitality.

Milda is a boss fought in Grandia, fought in the Tower of Doom. She is fought with Justin and Feena in the party after Milda knocks Rapp out prematch with a series of punches.

Milda makes an appearance as a playable character in Grandia Parallel Trippers and is recruited in the Sky Isles. She can wield sword, mace and axe based skills just like the original game. She now has the ability to use monster skills as well.

Milda appears as a boss in Grandia: Digital Museum and is fought alongside Gadwin at the top of the Tower of Giosu. Milda has 9999HP and utilises many of the skills she possesses in the main series including Milda Hit. Milda gives the party 8000exp and 7500G when defeated.

Milda appears as a playable cocoroid in the Game Arts developed, online action RPG, Picotto Knights on PlayStation Vita. Milda and the other Grandia characters are available to download as additional content within the game.