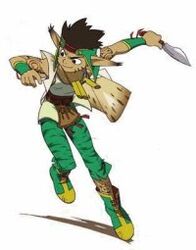 "Still the same stubborn Rapp, eh?? You sure have your father's blood."
―Cafu Chief[src]

Rapp (ラップ) is a playable character from Grandia. He is a young humanoid from the village of Cafu in East Elencia. He joins Justin in his adventures after Justin saves his village from the Garlyle Forces located at the Tower of Doom.

"I'm Rapp of Cafu!! Hmph! I guess someone needs to teach you a lesson "
―Rapp[src] 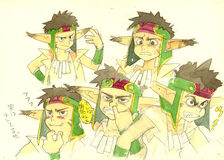 Rapp is a skinny humanoid with tan skin. Rapp has short, spiked brown hair and wears a green headband that extends down the nape of his neck, two holes have been cut on it's side for his humanoid ears to fit through. Rapp wears a white vest underneath a white jacket which is cut at the sleeves showing his full arm length. His bottom half is covered with a pair of green tights and a pair of green and yellow boots. Rapp wears a pair of green wrist bands and sports some Cafunian jewelery around his neck. Rapp has several distinguishable features including a cross scar on his forehead and several tribal tattoos on his biceps and calves.

Rapp is often passed off as shrewd and arrogant, but his attitude only reflects his heartache due to the petrification of his parents from Gaia. He now lives under the care of the village elder, who Rapp resents because of the laws he enforces to keep people out of the village. To help vent his frustration, he often spends time with his gang of other Cafu youths including his good friend Nicky.

Rapp suffered heartache at a young age as his parents were turned to stone by Gaia. He often acts rashly and his antics lead him to capture Justin and Feena but they quickly become friends due to their help in defeating the trent. After having enough of the unfair laws set by his village, Rapp decides to join Justin in his adventure.

Rapp is predominantly a speed attacker. He is agile and attacks fast. Rapp can equip Knives, Swords, and projectiles, although with the latter, Rapp can only equip throwing weapons such as boomerangs and ninja stars. His Strength and HP may not ever be as high as the other melee fighters such as Justin, Gadwin, and Milda, but his speed and decent Magic abilities make up for it. When attacking, Rapp is pretty fast and accurate. He can unleash quick Criticals, but due to his high SP, judicious use of his Skills is recommended during during boss battles. His Sword and Knife levels are initially low, so it is advised to train those weapons up to a good standard before he uses his preferred weapon of throwing items. Most of his spells are offensive in nature, but he has several status ailment spells such as Stram, Shhh! and Poizn. In addition to this, Rapp is the only character who can learn Def-Loss on Disc 2.

Rapp is a fast character that can unleash quick combos and criticals. With every level grown Rapp gains 1-2 points of Strength and Vitality, 2 points of HP and WIT but Rapp gains no increase in his agility and must rely on the bonus given from increasing his knife skill.

Mist Hide: "Ha ha ha ha!"
Doppelganger: "Gonna thrash ya good!"
Deathsword: '"Kill you with one blow!"
Missle: "You're not gonna get away from this! Ha!"
Fireball: "Fire dance! Ha!"
Sidethrow: "There's no use in hiding! Oomph"
Discutter: "Here it goes!"
Demon Ball: "Try this one! Ungh!"
Neo Demon Ball: "Try this howler! Oomph! Whoa!"

Person was KO'd: "Woo, we just got outta that one!"
Boss was killed: "See that shot of mine!?"
Normal victory: "Heh, not bad eh!?"
Perfect victory: "Come back with reinforcements!"

Rapp makes an appearance as a playable character in Grandia Parallel Trippers and is recruited automatically during the events of the Ghost Land. He can wield sword, knife and projectile based skills just like the original game. He also has the power to possess Fire and Earth magic but unlike the main series, Rapp cannot learn Wind or Water spells and therefore unable to cast Lightning, Blizzard or Forest spells either.

Rapp appears as a non-player character in Grandia: Digital Museum and is found in the mini game room. Rapp also appears in several minigames found in the Alent Museum. Rapp is a playable character in the eating minigame in which the player must eat as many plates of food as possible.

Rapp appears as a playable cocoroid in the Game Arts developed, online action RPG, Picotto Knights on PlayStation Vita. Rapp and the other Grandia characters are available to download as additional content within the game.