"We ... will depend on gods and miracles no longer. We will rely on none but ourselves. This I believe."
―Ryudo[src]

Ryudo (リュード) is the main character of Grandia II. He is a Geohound, a person hired to complete a job regardless of what they think or what their moral judgement is. He is cynical and pessimistic; he only focuses on completing any job he is hired for. His travelling companion is a falcon, Skye, whom he playfully picks on. Regardless of their somewhat harsh behaviour towards each other, they are the best of friends.

Ryudo was brought up on Garlan, the Isle of Swordsmen, with his elder brother Melfice, by the Village Chief, following the death of their parents. Both began combat training and showed incredible progess; Melfice in particular became a role model to Ryudo and the entire village. Ryudo often trained with Gatta in hopes of becoming like his brother, while also enjoying the company of Reena, Melfice's fiancé, who was like a sister to him.

One day the sword upon which the town was built began to create earthquakes, and in investigating the disturbance, Reena found a Piece of Valmar sealed near the sword. When she failed to return, Melfice went after her. The young Ryudo, having secretly followed him, then witnessed Melfice, armed with the sword, murder his fiancé in front of him and leave without explanation. Laying alongside Reena's impaled body, he wept and screamed in horror. The villagers were horrified to learn of the events, and Ryudo exiled himself from the island. Eventually Ryudo, alone and with a great weight of guilt, put his skills to use by becoming a Geohound.

Three years later, Father Carius of Carbo Village hired Ryudo to perform the task of escorting the Songstress of Granas Elena to Garmia Tower to perform a ceremony. While Ryudo waited outside the tower, things began to go wrong. The ceremony failed and Elena became possessed by the Wings of Valmar (Ryudo pulled her out of the cloud before it finished). When they returned to Carbo, Carius offered Ryudo another job: escort Elena to St. Heim Papal State to seek Pope Zera for assistance on Elena's possession (offering Ryudo a hefty fee for his trouble). That night, a strange woman, Millenia, attacked the church, defeated Ryudo in a duel and disappeared. The next day, Ryudo and Elena began their journey to the Granas Cathedral in St. Heim.

From this point forward, Ryudo became drawn more toward the upcoming threat of the Great Devil Valmar and to what his single, separated body parts could inflict upon the world.

Joined by Roan, Mareg, and occasionally Millenia, Ryudo reached St. Heim after defeating two pieces of Valmar, the Tongue and the Eye. But Zera explained that he lacked the power to help Elena, and directed Ryudo to find the Granasaber, a sword wielded by Granas during the Battle of Good and Evil. The party set out to find it.

Along the way, Ryudo encountered Melfice; first at Cyrum Kingdom, Roan's home and where they fought the Claws of Valmar (Tio, an Automata and victim of the Claws, replaced Roan, who became king and stayed to improve his country's situation), then at Garlan, where Ryudo faced his past. It took him a long time to understand that his brother was no longer truly himself, being instead little more than a host for the Horns of Valmar. His fiancé had been possessed, and when he killed her, the Horns passed into Melfice.

Following Melfice's defeat, Ryudo himself became possessed by the Horns of Valmar, and fell unconscious. Elena prayed and begged Millenia to save him, who managed by sealing the Horns inside him (to avoid destroying his soul).

Fully recovered, Ryudo and his party continued onward to Nanan Village, Mareg's home, where they were directed to the location of the Granasaber. After finding the giant sword and battling the Body of Valmar in the process, and discovering that it could be piloted, they returned to St. Heim as the "Day of Darkness" began.

There, Ryudo's party fought the Cathedral Knights, who turned against the citizens, and High Priestess Selene, who transformed into the Heart of Valmar. They confronted Zera, who betrayed them by revealing the truth about the Battle of Good and Evil and confessing his intentions of reviving Valmar before abducting Elena to Valmar's Moon. Ryudo vowed to rescue Elena and stop Zera. He and the remaining members returned to the Granasaber and traveled to the moon.

After rescuing Elena and escaping from the moon, losing Mareg in the process, Ryudo and his party returned to a Cyrum besieged by Valmar's minions. They assisted Roan in defending the town, and he directed them to the Birthplace of the Gods, where Ryudo confronted the Horns and emerged with the true Granasaber. Understanding there is true light in the hearts of people, he challenged the revived Valmar.

Journeying to Valmar's body, Ryudo's party confronted Zera, who attempted to discourage their fight. Zera assumed the form of Valmar's Core but Ryudo and his party defeated it. Separated from Roan and Tio, and reunited with Millenia, he faced Zera a final time, defeating him once and for all and permanently destroying Valmar.

A year later, Ryudo laid the Granasaber to rest and made his peace.

The betrayal of Melfice, the person he trusted the most, leads to his initial loss of trust in anyone. He is somewhat shy, so he sometimes has difficulty explaining his feelings. He develops loving feelings for both Elena and Millenia as the story proceeds. For a good part of the game, he's a bit of a smartmouth, constantly insulting and belittling everyone he comes across, though this may be due to his wanting to cover up his negativity towards trusting others rather than immaturity.

For all intents and purposes, Ryudo is a physical fighter. Early on, he is the primary melee fighter who consistently deals the most damage, at least until Mareg shows up. His weapon of choice is, of course, the sword which he wields with expertise. He has a decent amount of MP, but only a fair amount of MAG to back it up. Because of this, it is best to consider equipping him with a Mana Egg that consists mainly of support spells like Diggin' and WOW!. In an emergency, he can be used as a backup healer, but only just. He should also be equipped with skill books that raise his physical parameters such as HP, STR, and VIT. However, through character, skill book, and egg leveling, he can be equipped with the more offensive based eggs such as the Chaos or Dragon Eggs, which proves handy for more difficult battles along the story if the player is willing to grind. Though Ryudo isn't a mage, he deals roughly the second highest MAG ATK power. Any perks that the player particularly enjoys can be given to Ryudo as well such the item speed skill. One of his attack skills are lightning-based, so it's best to use it accordingly. Despite his dominance in strength and defense, Ryudo is not a designated tank. His overall average attributes make him versatile for most situations, typical of a lead protagonist. 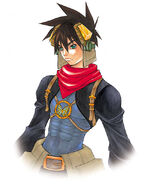 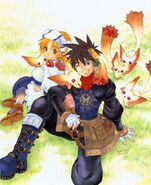 Ryudo and Elena (and Carros)