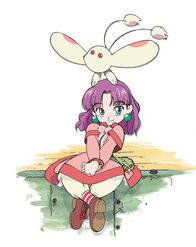 "I want to go on adventures with you, Justin!"
―Sue[src]

Sue (スー) is a playable character from Grandia. She is a little girl from Parm, and the childhood friend of the game's main protagonist, Justin. She joins Justin on his quest to find Alent and solve the mystery of the ancient Icarians. Sue is always accompanied by her pet creature, Puffy. 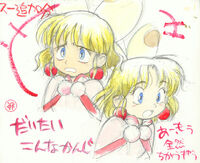 Sue has shoulder-length purple hair with two bangs either side of her face. She has freckles, blue eyes and resembles a regular human girl. Sue wears a pair of green ball earrings but it is unknown whether or her ears are pierced. In addition to a dual-colour pink dress, Sue wears white leggings with pink and white striped socks and wears pink shoes adorned tan soles and red laces.

Sue is Justin's childhood friend. She often tries to act like an adult and constantly encourages Justin to do so as well. Sue is energetic, knowledgeable and shows wisdom well beyond her years, despite this she occasionally doesn't take situations as seriously as they should be. After losing both her parents, she was taken in by her aunt and uncle and regularly visits Justin and his mother, Lilly for company.

Sue is Justin's closest friend, and she is often seen tagging along with him on "adventures". Sue's parents died when she was only an infant, at which time her aunt and uncle took her in as her legal guardians. Because of this, Sue is extremely mature and responsible for her age. She is often credited for acting more grown-up than Justin, even though she is at least six years younger. At a young age, Sue became used to eating her meals with Lilly and Justin at their house, much to the approval of her aunt and uncle. She tries to act as Justin's responsible guardian, often advising him on manners and work duties. Even she agrees that Justin could not carry out his adventures without her assistance. She often purposefully oppresses her inner childhood feelings in order to appear more grown-up. Because of this, she resents being called a child or a kid. At some point in time, she inherited the creature known as Puffy from Justin, which was actually a creature his father discovered on his adventures. They've become so accustomed to each other that Sue actually uses Puffy in battle. The sprite of Sue can often be seen twirling Puffy like a baton in order to conjure up a spell or to throw him to damage the enemy.

Sue uses maces and ranged weapons as weapons, she also has access to some potent magic spells. Sue can best be classified as a classic support character. Some of her skills allow the player to heal the party, give a boost in strength, or even put enemies to sleep.

Sue is a slow character with a low base HP. She makes up for this with a high base Wit. With every level gained, Sue gains 1 point of HP, Vitality and Agility, 1-2 points of Strength and 2-3 points of Wit.

Sue makes an appearance as a playable character in Grandia Parallel Trippers and is part of the first battle ready party along with Feena and Yuuhi. She can wield projectile and mace based skills just like the original game. She also has the power to possess Fire, Water and Earth magic but unlike the main series, Sue cannot learn Wind spells.

Sue makes a return in the spin off title, Grandia: Digital Museum. She is one of only three playable characters available in the game along with Justin and Feena and is available from the beginning of the game. Sue's fighting style is the same of that in the main game, she is the least physical of the three characters but has the highest base MP and Wit.

Sue appears as a playable cocoroid in the Game Arts developed, online action RPG, Picotto Knights on PlayStation Vita. Sue and the other Grandia characters are available to download as additional content within the game.