The Sult Ruins are an ancient Icarian ruin located in the north of the Messina continent in Grandia. These ancient ruins are the only known ruins of Angelou on the continent and are being excavated by the Garlyle Forces.

Justin recieves a letter of introduction from the Curator of the Baal Museum which allows him access into the ruins that are currently being excavated by the Garlyle Forces in search of the final piece of the Spirit Stone. When Justin goes there with Sue, he is initially allowed in by the guard but then he meets Saki, Mio and Nana who rip up his letter and tell him to leave.

Justin enters anyway and manages to navigate past the soldiers and reach the head statue deep in the ruins which, to his surprise, opens up to the glow of the Spirit Stone he is holding. They venture on to the inner room and meet Liete. Liete tells them about Angelou and the Icarians, but then tells him that if he seeks more answers, he must travel to Alent. It is here that Justin makes it his mission to travel to Alent.

On the way out, however, he meets Colonel Mullen and Lieutenant Leen. Mullen attempts to stop them leaving, but Justin uses the moving platforms to lose them and escape. Justin and Sue also manage to defeat the Rock Bird Mullen had left for them as a trap. The pair then leave the ruins and return to Parm. 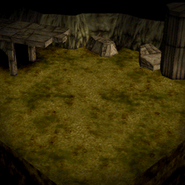 A battle background in the Sult Ruins
Add a photo to this gallery
Retrieved from "https://grandia.fandom.com/wiki/Sult_Ruins?oldid=17597"
Community content is available under CC-BY-SA unless otherwise noted.