Tio (designated TIO-124) is an Automaton who was produced by the followers of Valmar to fight in the battle of Good and Evil. She was programmed only to follow her master's orders which were usually to kill and destroy. She looks just like a human but lacks feelings which makes it hard for her to understand human emotions. She will often try to imitate human actions to help her learn.

Tio was constructed as a pale-skinned humanoid with two antennae, but lacks any emotions or feelings. All she knows is to carry out orders when they are given. When she is treated as human, she often becomes confused and seeks guidance from others.

The party first meets Tio when she is guarding a piece of Valmar for Melfice. She attacks the team but, when Mareg rescues Tio from the collapsing building after the battle, Tio no longer has to serve Malfice and Mareg tells her she is her own master. This confuses Tio so Mareg attempts to help Tio, throughout the story, to discover her heart.

After the final battle, she is found by Roan to be working as a nurse in Cyrum.

On the surface, Tio is an emotionless being - built only to follow orders. She does not know how to feel emotion and does not understand it in others. Mareg shows her how to feel her heart and the more time she spends together with him, Ryudo, Elena and Millenia, the more she shows emotions and feelings. By the end of the game, Tio discovers her ability to feel and is ultimately very happy in her new life.

Since Tio is obviously a robot, her attacks may appear synthetic, but she is still a formidable fighter. Her weapons are twin rings that appear from her hands when combat begins. Her greatest asset is her speed, often being noticed as the fastest in the game even though her strength and HP may not be on par with the heavy hitters like Ryudo and Mareg. One of her skills is wind-based and the rest are surprisingly effective, most of them being offensive in nature. She is also fairly good at magic, but is often considered to play a good support mage occasionally depending on the type of mana egg equipped. For running fast, she also attacks quickly. Because of this, it may be in the player's best interest to equip her with accessories that increase the number of combo hits she can achieve (her attack animation is quite fast to begin with so this benefits her enormously in the long run). With this setup, she can keep bosses staggered while the others go to town with magic and skills. On top of that, it may not hurt to make the female robot even faster by equipping her with leggings or skill books that increase her agility further. It is important to note she will not gain her final special move until the near end of the game. Its usefulness lies in boosting the entire party's parameters by one level for a fairly low amount of SP; with Tio's speed, she can bolster the team's stats up to the maximum level of five, turning them into invincible warriors within only a few turns. 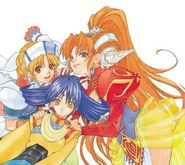