The Twin Towers are an ancient Angelou ruin located in the west of The Lost World continent in Grandia. Surrounded by uncharted areas of the Lama Mountains, The Twin Towers can only be accessed by sea with the village of Gumbo the most accessible point inland.

The Twin Towers were built as a temple for the Icarians back in the time of Angelou and is the resting place of the Medal of Wisdom.

Justin and his friends visit the Twin Towers in order to meet Liete once again and receive guidance. However, upon entering the ruins, they are intercepted by the Garlyle Forces who are also trying to uncover the secrets within. The group sneaks in, but also have no luck in entering the ruins. They attempt to leave, but they meet Mullen and Leen on the way out. After a confrontation, Justin, Feena, Mullen and Leen are teleported into the ruins.

Feena and Mullen are transported into a section of the tower above the location where Leen and Justin were teleported. The two groups agree to move towards the top of the tower to exit. Along the way, Leen and Mullen explain some of the Icarian murals on the wall, further adding to Justin's knowledge of Angelou's destruction.

Justin acquires the Medal of Knowledge from Liete, who advises Justin to go further east. Leen helps Justin to escape the ruins, and leaves after having an important discussion with Justin. Feena meets up with Justin again, along with Sue and Gadwin, and they leave the ruins. 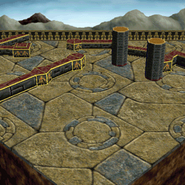 A battle background inside the Twin Towers 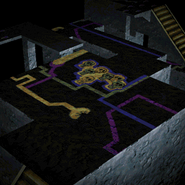 A battle background inside the Twin Towers
Add a photo to this gallery
Retrieved from "https://grandia.fandom.com/wiki/Twin_Towers?oldid=17898"
Community content is available under CC-BY-SA unless otherwise noted.