"Bring to this world Light, Peace and Harmony."
―Zera[src]

His Holiness, Pope Zera Innocentius (ゼラ＝イノセンティウス), is the head of the Church of Granas. He preaches the second coming of Lord Granas and constantly prays for the happiness and prosperity of mankind. It is said that his kind and benevolent heart touches anyone who meets him. The recent disasters that are occurring worldwide seem to trouble him deeply. But he has a greater part in these events than anyone knows.

In secret, his mind is twisted after learning of the death of his god, Lord Granas, at the hands of his nemesis, Valmar, from ancient annals of the Granas Cathedral, despite not understanding the true origin of these deities, who were originally mortal magicans that evolved from their convoluted experimentation.

Believing that Darkness is pervasive in the souls of humanity, Zera fanatically seeks to become the resurrected Valmar to replace Granas and remake the world in his ideal image as the one, perfect god - even if he has to sully his own hands to realise his goal. He is the main antagonist of Grandia 2.

Once Elena is tainted by Valmar, he is sought out by her and Ryudo for help. He sends them to find the Granasaber, which leads the group to various locations and even crossing continents, in order to exorcise the Wings of Valmar within her.

When the party returns to St Heim Papal State, it is attacked by the Cathedral Knights, with Valmar's Moon overshadowing the city. After defeating the religious soldiers, their black blood reveals them to be not human. Encountering the fanatical Selene, it is revealed that she is possessed by Valmar's Heart and has been following the instructions of Zera. Selene defeated, Elena reveals to Ryudo that she has been collecting pieces of Valmar as part of Zera's assignment to her. Elena meets with His Holiness Zera and asks him if he really did implant Valmar's Heart into Selene. Zera doesn't deny it. Before he finishes, Ryudo and the other protagonists appear. Demanding answers from the suspected Pope, Zera agrees to answer their enquiries, as well as the "reward" he promised to give to Ryudo. He asks them to come inside the next room. Inside this room, Zera reveals to the party the truth of the aftermath of "The Battle Of Good And Evil" via astral projections of the past: In summary, Granas was defeated and killed, and Valmar was the victorious one. Mareg, in anger, protests at the pointlessness of acquiring the Granasaber. Zera casually rebukes him that it is futile to use the sword of a dead god to defeat Valmar, who is about to be newly reborn. Elena, who is shocked by this, cannot believe these are the words of Pope Zera. Zera laughs and curses the now dead Melfice for not finding the Granasaber first, revealing the possessed Melfice to be an associate of Zera. His purpose was to free Valmar's Body from the Granasaber; if he had fulfilled his task, Zera wouldn't have needed Ryudo and Elena. His true goal was to collect Valmar's body parts to bring upon his revival, revealing Zera to be the true main antagonist of the story. Ryudo calls him a fool because the devil's trade lies within damnation. Zera doesn't deny Ryudo's words, but with Granas dead he has no choice but to use Valmar's power. Amidst the confusion, Zera captures Elena and teleports to Valmar's Moon, laughing manically.

After travelling to the inner depths of the organic Valmar's Moon, the party fights with the Egg Guardian and defeats it. Zera notices the commotion and welcomes them to the ceremony of Valmar's rebirth. Zera exorcises Millenia from Elena, who is encapsulated within the core of Valmar's Moon, with his powers. Zera greets the Wings of Valmar who is inside the core's nucleus. Despite his confusion of Millenia's reluctance to become the completed Valmar, Zera laughs and begins the ceremony regardless. During the ceremony, Zera reveals that he will discard his mortal body and allow his spirit to possess the newly-revived Valmar and become the perfect God. With the last of her strength, Millenia releases Elena from her confinement and transports the party outside of the Moon. Zera notices the Horns of Valmar are missing from the ceremony. Regardless, he proceeds with the transmigration of his soul to become the will of the newly reborn Valmar.

As Valmar, Zera attempts to wipe out human civilisation to begin his process of remaking the world. He creates monsters to attack the Kingdom of Cyrus. In the assimilation machine of the Birthplace of the Gods research facility, Zera attempts to attack Ryudo's psyche to claim the Horns of Valmar for himself before Ryudo properly utilises its power. This, however, failed as the Horns of Valmar becomes the Granasaber that Ryudo could wield to oppose Zera. Struck by the energy blasts of Ryudo's newfound power, Zera challenges him and his party to a final battle inside his weakened body.

Inside Valmar, Zera taunts the heroes before he reveals his new form as the Core of Valmar. Defeated, Zera creates a doppleganger of Millennia to manipulate Ryudo into relinquishing the Horns of Valmar. Zera was taken aback by the revival of the true Millennia by Elena's intervention; he is unable to comprehend this miraculous turn of events without any divine intervention. Lamenting over the death of Granas and a world without a godhead to guide humanity, Zera attempts to cause Valmar's body to explode to erase all of existence before escaping deeper inside a new dimension within Valmar.

In this new dimension, Zera confronts the trio of Ryudo, Elena and Millennia. With his sanity completely gone, Zera assumes a new transformation to thwart the heroes from destroying him. Before dying, Zera shows some semblance of contrition for his wicked misdeeds. His desire to become Valmar was due to his innate fear of the prophesied Day of Darkness. Was it Valmar's influence or Zera himself that influenced him to become such a hollow monster to preserve his existence, he ponders? As Zera slowly fades away, the heroes show no forgiveness for the wicked, treacherous, hypocritical clergyman he came to be.

A benevolent and kind leader of the Granas Religion, everyone appears to be in awe by the Pope's charisma, including the cold and detached High Priestess Selene. In reality, however, his benevolence serves as a mask to hide his manipulative and dangerous nature. He has a god complex and views everyone, including his most devout followers, as pawns for his egregious machinations. His true objective is to gather all of Valmar's body parts to revive him so that his soul will possess the reborn dark god, thereby becoming the absolute, perfect God he envisions to remake the world in order to save it from ruin - or so he believes.

As the highest member of the Church of Granas, Zeras has an array of knowledge and magic, even knowing the most arcane spells to teleport, levitate, control spawn of Valmar, and even control the pieces of Valmar himself. Zera has the ability to transmigrate his soul, which he uses to possess Valmar's new body.

After possessing the resurrected Valmar, Zera's powers grew exponentially to that of a god-like status.

His most dangerous gift, however, is his powerful charisma, which he utilises to manipulate his allies and foes alike, even the sceptical Ryudo, to either do his bidding or to weaken their resolve. 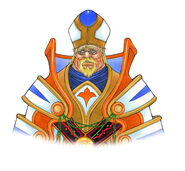